editor, William Tudor (1779-1830), and other members of the Anthology Club. It was their intention to rival the leading British magazines.

Reproduced below is a letter from one of the magazine’s distinguished early subscribers, Thomas Jefferson. Dated March 27, 1825, it asks the NAR to adjust his subscription. 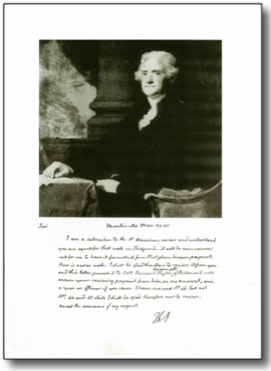 Letter to NAR from Thomas Jefferson

Until the Atlantic Monthly was founded in 1857, the NAR was the foremost magazine in the US. In 1878, it moved to New York City, where publication continued until 1940, when its production was stopped as a result of its owner’s scandalous wartime activities. In 1964, it was officially revived by Iowa poet Robert Dana at Cornell College, who then served as its editor for four years.

In 1968, when Cornell College decided to sell the magazine, it was purchased by the University of Northern Iowa (which the year before had changed from a state college to a university). Poet and fiction writer Robley Wilson was appointed as the NAR’s new editor, who continued to edit the magazine until his retirement in 2000. Its current co-editors, Vince Gotera and Grant Tracey, were appointed in the same year.

During the same period, it has increasingly been cited for the excellence of its visual art, including its full-color covers and interior black and white story illustrations.