New York City never sleeps, but late at night it pauses to take a breath. Deep underground, on the subway platforms, the floods of people empty out; those who remain keep their distance from one another, for safety. You stand and wait for the next train to arrive, your ears straining for its rising rumble, your teeth gritting with frustration as the minutes creep past.

At that low ebb, the repair-work begins in earnest. You see it first as a white flicker at the edge of your vision, which resolves into a flashlight beam bobbing down the black throat of the nearest tunnel: subway workers checking the lines for wear and tear. Sometimes they emerge into the station, climbing onto the platform to await the train that will carry them to the next point on their shift. And it’s not just repairs; with each passing day, the urban miners drill a little further into the bedrock beneath our feet, creating the routes that (the mayor promises) will ease the crushing crowds, the delays, the collective irritation.

It takes a lot of effort to keep the great metal heart of the subway system beating at roughly the right tempo. With each passing year, though, it seems that tempo becomes more and more arrhythmic. The trains take longer to arrive, or never appear at all. Sometimes they stall in mid-tunnel, under the river, sparking your latent claustrophobia. The best way I’ve found to get through the daily commute is to adopt a certain Zen attitude, and bring a book. 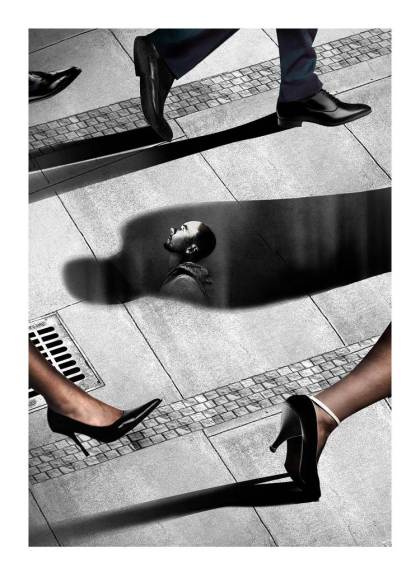 One night, as the M train crawled its way through Manhattan’s arteries, I glanced up from my copy of Philip Levine’s poems (Detroit crumbling majestically, line by measured line) to see a pair of grimy boots float past the window, at eye level. It took a moment for my eyes to adjust to that exterior dimness, to realize that I was looking at a worker standing on the narrow concrete walkway that runs the length of some subway tunnels. I couldn’t see his face; but at that moment, separated by a smeared pane of glass, I wondered about his thoughts. Does spending most of your life in the dark, sharing the tight space with steel leviathans that could crush you in an instant, create its own Zen? Or does it just wear you down?

I reflected on the titanic effort necessary to keep these hundreds of miles of track alive, and the toll that takes on the human body: the broken bones, the weakened knees, the sooty lungs, the long shifts, the fearful prospect of death by fire or electricity. There’s a price in blood and spirit for the frameworks that support us, and it’s largely paid outside of our sight. That was the kernel of “Sandhog,” my poem, although it didn’t emerge fully formed; I made a point of tinkering with its structure every time my train stalled for a lengthy period of time, as a sort of ritual to goad the system into moving again. I like to think the writing made me more empathetic—and less frustrated—about the wait

Nick Kolakowski’s fiction and poetry has appeared in the North American Review, The Evergreen Review, McSweeney’s, Carrier Pigeon, Shotgun Honey, Crack the Spine, and The Adirondack Review. He is also the author of How to Become an Intellectual, a book of comedic nonfiction. He lives in New York City, where by day he writes about science and technology for a number of publications.

Illustrations by: Anthony Tremmaglia, an Ottawa-based illustrator, artist, and educator. His clients include WIRED, Scientific American, Smart Money, HOW, and San Francisco Weekly. Anthony is featured in issues 299.1, Winter 2014 & 299.4, Fall 2014 and his most recent work (featured above) in upcoming 300.2, Spring 2015. Find more of Anthony’s work at http://www.tremmaglia.ca/