Individualism. Suburbanization.  An Interstate highway system. And the American zeal to zoom.

From Steve McQueen’s ’68 390 Mustang Fastback in the police thriller Bullitt, to the Aston Martin DB5 driven by Sean Connery in Goldfinger, to Peter Faulk’s rumpled ’59 Peugeot 403 convertible in the TV series Columbo, it’s no secret that it’s the car that taps out cultural code to telegraph an undercover agent’s image. To encounter an operative behind the wheel, some secreted cul-de-sac within the imaginative psyche secretes the desire to drive – and suddenly readers or viewers believe it is we who are behind the wheel eluding peril and saving the day.

Of course my building the Spycar came months before I would scrutinize why that vehicle proved the secret weapon in promoting my debut novel – a psychological thriller titled Special Operations – and The Seethrough Spybook Series, of which S.O. is first installment.

My initial decision to build the Spycar was an act of utter frustration with the broken world of publishing, ubiquitous advice to self-publish and self promote atop heaping discussions of “breaking the mold.”  I thought: maybe stuff it into the furnace, then hammer it white-hot on an anvil stamped ACME—till I wind up with something I can use.

Equipped with a stealthy set of driving lights fashioned from cocktail shakers and a theatrical smoke screen device in the trunk, the Spycar awakens the twelve-year-old in all who see it. It captures and codifies the essence of my debut novel’s entertainment value—not unlike ways in which the more recognizable spyrides shoot us clues about the sleuths who drive them.

From the results of my 7,800 mile book tour this past summer, it seems I chose the right vehicle: a 1972 Volvo 1800e, a first departure from Volvo’s reputedly stodgy and square-ish looks—Italian by exterior design but powered by an engine of modest roots and outlandish last ability which had previously been the driving force of Volvo’s farm tractors. A delightful balance of style and stubborn: What better vehicle in which to tour the United States sowing Special Operations?

The American road trip seems somewhat of a covert operation. While the rest of the herd’s heading for after-school soccer practice, we’re hiding in plain sight and on the road to Shambala. Striped with an X of yellow crime scene tape, the all-black Spycar kicks up book sales; this past summer, day after day, mile after mile, independent bookstore after independent bookstore—from Seattle to Boston to Washington D.C. and then back to Seattle: people’s eyes lit up and copy after copy of Special Operations got sold—the title page of which I habitually inscribed, “Enjoy the ride!”

For an extended version of the blog and more information on the Spycar, click here to visit Tom Lukas’s website. 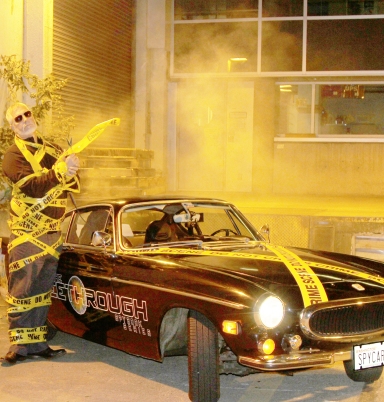 Tom Lukas‘s home is in Seattle and Bogotá. He received a Ludwig Vogelstein grant to finish his first novel, Contrapasso, or, a Season of Consequence, for which he seeks a publisher. Tom is featured in issue 294.6, November-December 2009.